Here are the best 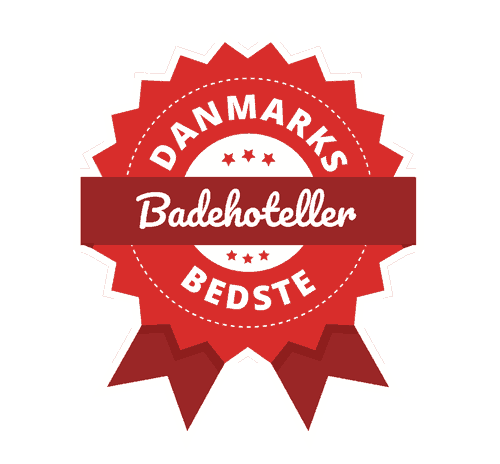 Are you looking for a beach hotel that will give you a nice and relaxing stay? Bath hotels in Denmark have had a proper renaissance with TV 2's popular TV series. Rarely has it been so popular to have a beach holiday as in the old days, but where do you actually find the best Danish bathing hotels? We have made the processing and bring you here the definitive guide.

Scroll down to see:

However, we begin with a small appetizer:

In the booklet "Skagen Badehotel on Grenen - Danmarks Healthcare Source" from 1912 the text reads:

"You get out of bed, go to the window and open it! The air from the sea flows in so fresh and salty that you can probably feel it on your tongue when you lick your mouth. "

The pamphlet did then, as TV 2's TV series does today - makes us dream of the uncomplicated life and well-being of the water. This is probably why you have come to this site as well. But where are the places where you can still experience the classic Danish beach holiday at a waterfront hotel? You can of course take one of the expensive ones, but the truth is that after TV 2's hit series took the country by storm, hotels have galore been stuffed a 'bath' in front of 'hotel' in name or description. That is why we have created this overview, where with the help of experts and your votes (you can vote further down), we guide you to the best places. dan

Beach hotels in Denmark you must visit

In Denmark, we have a rich selection of beautiful bathing pensions, modern and classic, and to focus on the beautiful places and make it easier to find them, we do a poll every year, where we ask the Danes about which hotels they best can recommend.

Before the season really begins, we select the best so that you can find the places worth a visit.

From Monday 7 February, TV 2's Badehotellet will once again roll across the screen, and in keeping with tradition, we all ask you where to go if you want the most wonderful stay at one of the real beach hotels.

This year's program is as follows:

On March 8 at At 12.00 we will announce winners for Jutland, Funen, Zealand and of course the whole of Denmark.

This year's vote took place between 21 February and 8 March, where over 4,400 Danes voted for their favorite hotel, after which we can say congratulations to the following hotels: 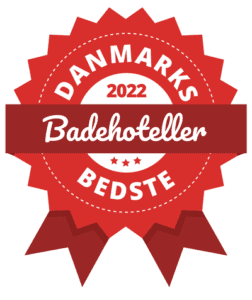 The regional winners were:

The vote ended as follows:

This year's vote took place between 15 February and 2 March, where more than 10,000 Danes voted for their favorite hotel. It was a close fight to the last between Strandhotel Røsnæs and Knudhule, the winner from 2019. In the end, however, the Zealand bid from Kalundborg drew the most votes. In total, 12 of the beach hotels received over 250 votes, which gives a pin on our map of the country's best experiences. 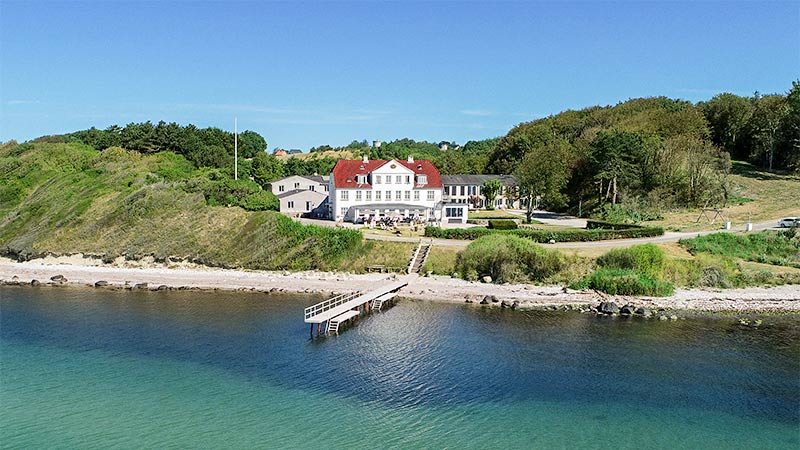 The final position and beach hotels with over 250 votes:

This year's vote took place February 17 - March 3 and received over 11,000 votes. Thank you to all of you who have voted and made it possible for us to say congratulations to these places in 2020:

In connection with TV 2's viewing of season 6 of their popular TV series, we asked you again.

6,878 SMS votes have been received, and we can hereby present you to the top 10 of the year:

The overall position ended as following:

The first year of our vote, we ended up sending the award to North Jutland. The top 10 ended as follows:

If you don't trust the 5,880 Danes, you can also see the the hotels that the TV 2 experts selected:

The hotels with restaurants in White Guide

White Guide is a recognized guide and guide to the best restaurants in the Nordic region. More than 300 Danish restaurants are included in the guide, and there are also several bathing pensions. Are you a foodie or just looking for a stay with luxury all around, then the following hotels are worth going for:

The list is of the hotels that are or have been included in the White Guide. Have we forgotten anyone? Write to OpdagDanmark on Facebook or via the comment box further down.

After the big hit with the TV series, TV 2 brought shortly after Denmark's most delightful beach hotels, where three experts at the beginning of 2015 went behind 16 of the reality bathing pensions to find the most beautiful of its kind. The following 16 sites were selected and visited:

The history of bathing holidays

The first bathing pensions appeared in the late 19th century. This is where the finer citizenship begins to holiday and in Copenhagen it is no longer good enough to take a trip to Frederiksberg (which at this time is considered to be in the countryside). As physicians began to prescribe fresh air and sea baths against diseases, it became exotic for the wealthy families of Copenhagen to bring their servants with them and move into summer residences in the countryside or on the coasts.

Fanø Vesterhavsbad opened as the first decidedly spa and bathing pension in the early 1890s. Watch video clips of the hotel and the old baths.

The spa hotel lived a tumultuous life with changing owners after the war and was finally closed in 1989.

Among the first bathing pensions was also Skagen Badehotel, which opened to bathers in 1898. The place was among the largest and finest and was visited by royals, rulers and wealthy people from home and abroad. The idyllic location on Grenen can be seen below in 1912. The hotel tragically burned as a result of a lightning strike in 1938. Read more about the fire at the sea side hotel in Skagen. 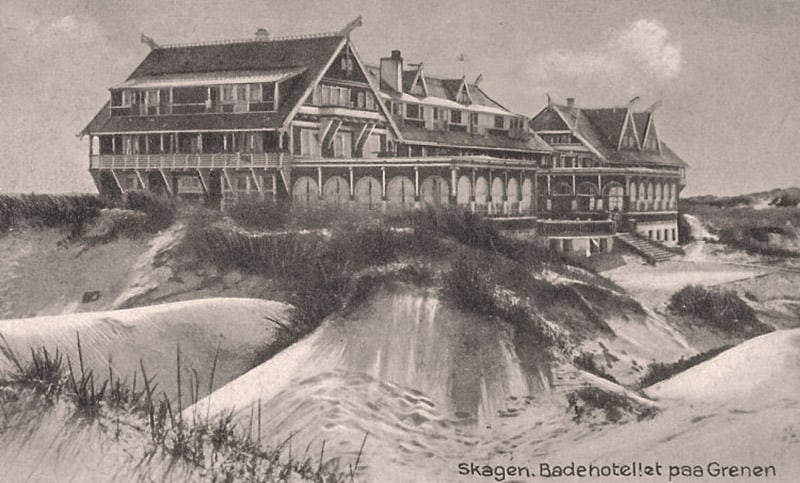 In the beginning, only the rich and wealthy had the opportunity to vacation. However, industrialization in the late 1800s led to a separation between work and leisure. Together with the ban on Sunday work from 1891, it helped to start the allotment movement and in time the concept of weekend also found its way to Denmark.

In 1938 the Holiday Act happened, which secured employees holiday with pay. In 1939 the law gave you 9 days of paid holiday and from 1940 a full 12 days (!). Today, the Holiday Act guarantees you 5 weeks of holiday and many have the option of a sixth holiday week through their agreement.

Have you enjoyed this article? Then leave us a comment in the box below and share the page with others via the buttons below:

Leave a Reply to Lisbet Have Cancel reply