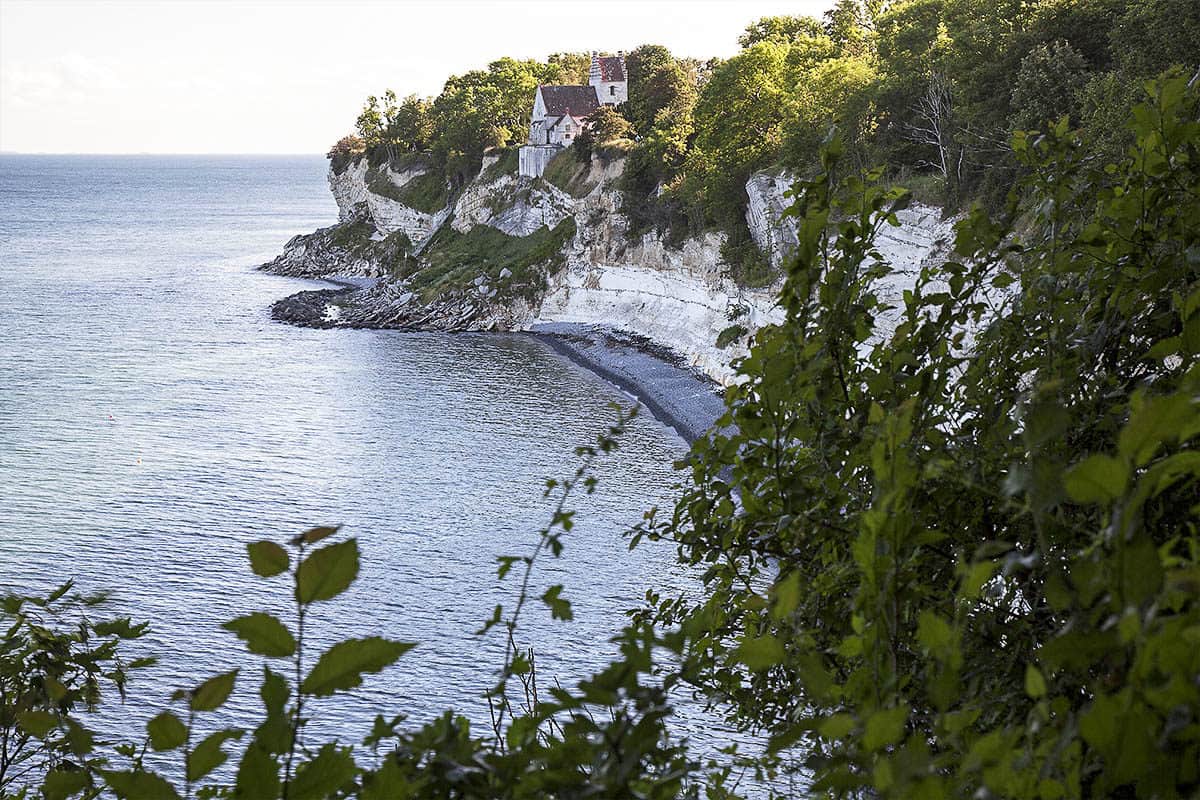 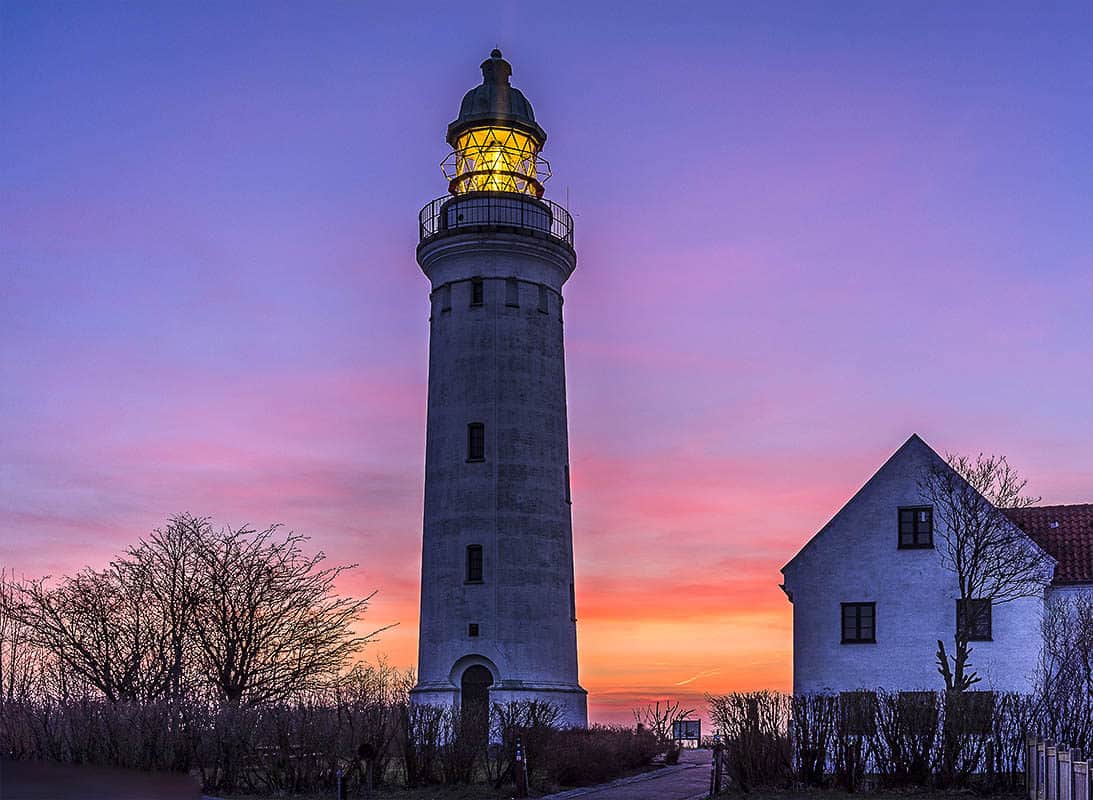 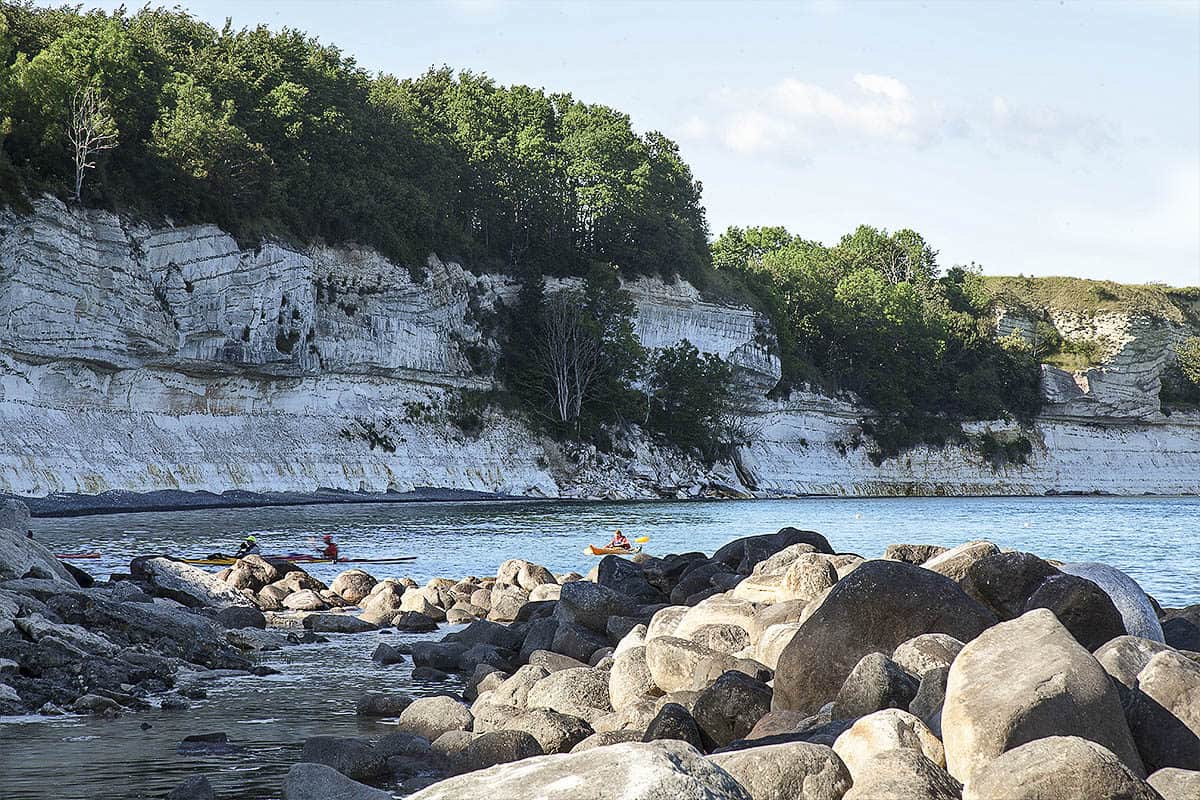 Stevns Klint is a breathtaking and unique evidence of the dramatic asteroid strike that hit Earth 66 million years ago. You can experience the cliff's impressive, steep sides from the beach, or you can enjoy the majestic view of the sea from the cliff top. Remember to notice how the blue-green colors of the sea are beautifully highlighted due to the high concentration of lime on the seabed.

Stevns Klint is up to 40 meters tall and extends 17 km along the coast. At the bottom the cliff consists of white writing chalk and at the top it consists of banks of white-gray bryozo lime and flint. In the chalk and lime you can find fossils of the animals that lived on the seabed at that time. You are not allowed to chop the cliff, but if you are lucky, you can find detached chalk and limestone blocks on the beach where you can chop fossils with hand tools. Above the bryozo lime lies a thin gray layer of fish clay. In the clay, scientists have found minerals from the devastating asteroid strike that hit Earth and wiped out the dinosaurs along with half of Earth's animal species. Stevns Klint has been named as part of UNESCO's World Heritage.

The best way to experience Stevns Klint is on foot. From Højerup, the view of Stevns Klint is particularly good, and here you can also go down to the beach via a staircase. In addition, Stevns Klint tramp trail stretches 21 km between the port of Rødvig and Bøgeskov Harbor. The tramp trail passes, among other things, Boesdal Kalkbrud, Højerup old Church, the lighthouse of Stevns and Holtug Kridtbrud, where there are parking lots and toilets.

“A beautiful place on a warm sunny day. There is a good place overlooking the cliff, where there is also a bench to sit on. You should be able to get out there with a wheelchair. There was also binoculars at the vantage point which makes it possible to get a closer look at the cliff.

If you just want to see more of the cliff there is a path you can follow, but note that it is overgrown and bumpy so it is not wheelchair friendly or for people who have trouble walking. However there are good places to take pictures along the on the path.
We also found a bench we could take a break on.

If you drive by car, remember that there aren't many parking spaces and payment is taken. There is a good restaurant where you can book a table in advance and I would recommend others to do so as it seems like a busy place.

The restaurant was cozy and near the viewpoint where the bench was. There is also a nice church by the cliff, which is worth a visit. Generally a great place to visit on a casual day off.“

Have you visited Stevns Klint? Help others by sharing your experiences and tips here.

How long and tall is Stevns Klint?

The cliff is 17 km long and 41 meters high at the highest point.

Is there free parking?

No, parking is paid. In addition, there are few parking spaces in relation to the interest in the place, so it makes sense to stop by at the slightly "crooked" times.

Use our guide to Zealand, where we have collected a handful of good ideas and tips for Zealand, both regarding experiences, places to eat and accommodation.

Taste experiences and restaurants on Zealand

Download our free app for Zealand (and the rest of Denmark) 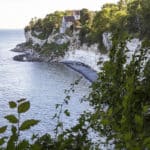 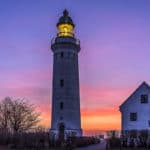 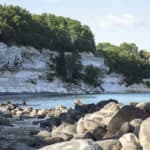